Most of us may accept that nonhuman animals experience suffering, but it may be easy to think that they suffer less than they actually hurt. Our inertia in dealing with climate change can lead to the extinction of many wildlife species, including our own.

Many people have an idealistic view of nature. Some people think that nonhuman animals live in paradise in their natural habitat. However, wild animals living in nature have lives that are far from peaceful, and most of them have to deal with the reality of the constant threat of losing their territories for Human occupation and, at the same time, to partake the enormous suffering that comes from this type of “coexistence.”

The word Dharma means path or Divine order. For us, Animal Dharma is supposed to be the “evolutionary program for animals” and the collection of natural laws they are submitted to.  Scientifically it is known as “Darwin’s Law of Natural Selection.” Buddhists believe that there is also specific dharma (svadharma), or set of laws to be followed according to one’s class, status, and station in life. We believe the same concept applies to other species of nonhumans as well.

“Think occasionally of the suffering of which you spare yourself the sight.” ~ Albert Schweitzer

Others believe that wild animals can cope with their suffering better than domesticated animals. Most of us may accept that nonhuman animals experience suffering, but it may be easy to think that they suffer less than they actually hurt. This, however, is not so.

Humans are not a kind species. As neglectful as we humans have been with our environment, one can imagine the desperate entropy efforts that the Marine wildlife must muster to survive an increased polluted ocean, or how migrating species can deal with the creation of Border walls and ever-intensifying forest fires? The reality that is staring at our faces show a picture of our future where not only Humans will be refugees of climate change, but a variety of animal species that have no chance to survive.

If you share a view of the compassionate way of living and believe that sentient beings’ matter, we should not be indifferent to their suffering. Also, we must bear in mind that the amount of pain and the number of premature deaths present in nature are very significant. Most animals die in painful ways when they are very young, so they have no chance of enjoying, pursuing their goals or realizing their capabilities. This is mainly due to reproductive strategies prevalent due to evolutionary reasons.

The reproductive strategy that is predominant in nature consists of having a large number of descendants of which the vast majority dies not long after coming into existence. This means that most animals in the wilderness have little time to enjoy positive experiences and often die in ways that involve significant suffering (such as starvation, dehydration, cold or live eating). In this way, population dynamics suggest that distress prevails over happiness in nature, just as part of their evolutionary program. With our own growing human population, we are jeopardizing their survival even further.

Evolutionary reasons for the predominance of suffering in Wildlife

Natural selection works when different individuals come into existence, but only a few survive because there are not enough resources available to everyone. Because of these many individuals rise just to die soon after, and a reproductive strategy that maximizes the number of newborns can prevail for evolutionary reasons even though this implies that suffering and premature death increase tremendously.

Can animals in nature be harmed as domesticated animals and humans?

Animals that live in nature face significant suffering. Human beings are not the only beings who can experience pain and well-being. There is no reason to have negative attitudes towards animals that live in the wilderness from those we would have if they were domesticated animals or humans. So we should try to help animals in their natural environment whenever possible.

What you can do to help Wildlife and reduce Animal Suffering?

There are different ways to help animals that live in wild environments and save them from the many damages they face in the wilderness. In the long run, the way to get the needed help is for those of us who are always concerned about this issue and are now starting to raise awareness about the wildlife situation and the discrimination they suffer.

But there are also useful things we can do for them in the short term. Some people may want wildlife to be aided, but they fear that we may not have the knowledge to do it correctly, and so we would end up doing more harm than good. Fortunately, though, there are many ways to help animals using our current knowledge.

In fact, there are currently many examples of successful ways to help animals living in nature that benefit them significantly. Many involve assisting animals individually; others include maintaining a much larger group of animals, which can be done in scientifically sound ways to ensure that no adverse consequences effectively transpire. Regrettably, people are not yet aware of all the different ways that animals can be and are being helped today. Let us name some examples.

“The assumption that animals are without rights and the illusion that our treatment of them has no moral significance is a positively outrageous example of Western crudity and barbarity. Universal compassion is the only guarantee of morality.” ~Arthur Schopenhauer, The Basis of Morality

Many cases in which animals are aided in nature have been recorded. Sometimes small groups of individuals (or even a person) make a big difference to some animals by providing them with assistance. In other cases, animals are helped by the efforts of organizations or governments that follow specific policies that benefit animals, even when the purpose of the measure is not to help them.

Some of these ways of helping animals affect only a small group of animals. We may think, therefore, that these events are unimportant and should not be taken into account. But opening our minds to these possibilities makes it more likely that we will begin to support a more significant number of animals and in a wider variety of contexts. 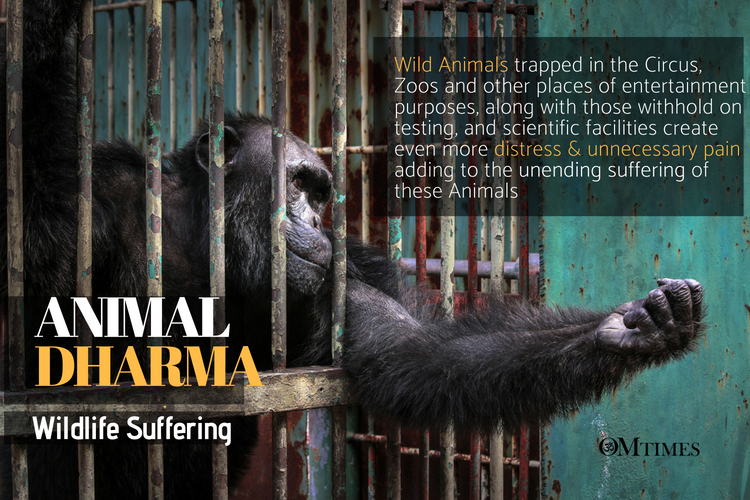 Here are some ways to help animals in nature:

Rescues of trapped animals: Animals often suffer accidents in their environment. For example, they may be trapped and suffer a slow and painful death. In many cases, it can be relatively easy to release and heal them.

New Paths to a Better World

Many animals die from natural disasters, earthquakes, volcanos, and wildfires. It would often be possible to save many of them if humans wanted to. Until recently, non-human animals have been neglected and kept out of evacuation strategies and rescue plans for natural disasters, but now this is starting to change. Support the efforts of local nonprofits that rescue animals during natural disasters, allowing them to reach safe places as they flee these places. For the regular person, placing a bucket of water outside on the path of the fleeing animals can mean the difference between their life and death.

One action that can be done straightforwardly is the supporting of certain species of Bird during harsh winters. During the Spring and Summer, the birds can find food easily but during the cold months of winter; survival becomes a daring, challenging feat.

The Vaccination and handling of sick and injured animals

Diseases and injuries are other sources of eternal suffering and distress for animals that live in nature. But today we know ways to help them significantly. Several reputable organizations work with indigenous species of animals locally and abroad, and they try to give a chance to continue on their path of evolution with less suffering.

Animals in nature sometimes lose their parents. In such situations, they are often unlikely to survive. Most will starve to death even if they are rescued and cared for in their tender ages. That is the reason is very important to support your local Wildlife care centers.

Also providing Shelter to species during the cold of the winter can be an effective way to help wild animals to survive. Insulated birdhouses, Bat houses, and stray bee houses.

Working for a better future for wildlife

There are countless ways to support, even more, help if we had more knowledge and means. For this to be possible, what matters is that our societies are concerned with helping animals in nature. It is possible that if organizations never see wildlife help as necessary, the needs of wildlife are never addressed.

You will also enjoy Why Do We Ignore Animal Suffering?