My Octopus Teacher is a documentary about the friendship of a man and an octopus. The most incredible aspect is the understanding that demonstrates how the life of such a vulnerable being can bring unforgettable lessons to human beings.

But who would have thought that friendship could exist between a man and an octopus? That is the premise of “My Octopus Teacher,” a documentary that tells the construction of this improbable union.

Friendship is not a feeling unique to humans.

The Documentary “My Octopus Teacher,” presents an incredible story that demonstrates how life can be frighteningly wild and deeply sensitive at the same time. Scientific research has already proven that some animal species also create emotional bonds, either as a show of affection or as a help to increase their chance of survival.

The work directed and scripted by Pippa Ehrlich (in her first Documentary) and James Reed (“Jago: A Life at Sea “) takes place in the Western Cape province in South Africa. The protagonist is Craig Foster, a filmmaker who lived throughout his childhood in a house that had its backyard invaded by the force of the Atlantic Ocean waves. He grew up in direct contact with nature, always diving into the tide pools.

In a bad moment of his life, he returns to the same place and starts daily dives capturing the marine life in the shallow algae forest.
On one of the dives, just holding his breath, he noticed something strange, a kind of huddle of shells.
Underneath them was a hidden octopus, making a perfect trap for catching a fish.

Very interested in the animal’s behavior, Craig has the idea that it would change his life: what if it were possible to record every day of the life of this Octopus?

Savagery and Sensitivity in Perfect Balance.

How to find an animal that specializes in camouflage on a daily basis? How can such a fragile invertebrate live with so many predators around it? In search of these answers, visiting the cephalopod became the filmmaker’s daily routine.
The work is narrated and starred by Craig Foster himself, so there is a wealth of unique detail in the script. He often refers to underwater beings such as the jellyfish as Out of the worldly creatures.

As time goes by, the trust between the two only grows. With so much material recorded, it’s easy to choose the most exciting scenes, creating greater versatility to the Documentary, which includes scenes that transition between drama, comedy, and action scenes with an incredible chase between prey and predator.
In a discreet way but very willingly, the script includes the relationship between Craig and his son Tom, who was also going through difficult times. Through the feeling of belonging to the world, they try to reconnect with nature and the teachings of the “teacher” of the sea.

The soundtrack by Kevin Smuts, who has worked for years writing music for documentaries, is captivating, mesmerizing, and immersive.
The narrative creates a sense of curiosity mixed with a touch of melancholy, marrying perfectly with the photography of Roger Horrocks, another expert in the genre. 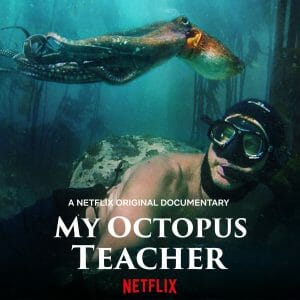 At various times, he takes advantage of the sun’s reflections on the sea to compose his paintings, building a perfect setting to highlight the movement of the animal’s tentacles and drawing a kind of dance with a beautiful natural location.
Another impeccable point is the sound design – in one of the scenes, for example, you can hear the octopus’ suckers create pressure on Craig’s hand and then a snap when he lets go.

Sentience and the nonhuman Persons

“My Octopus Teacher” is a documentary of immense tenderness and compassion.
Craig’s strength and will to continue daily visiting his friend is amazing, and it’s remarkable how this constancy was able to build this extraordinary friendship.
The Documentary creates an atmosphere of fantasy, mixing instants of agility and movement with the beauty and tranquility of quiet moments of contemplation. The Movie is not pragmatic in its narrative, but he builds a story weaved on mutual trust, with highs and low moments, danger, and rewards.

The story of My Octopus teacher is a journey of an emotional discovery of the interconnection of all beings living together in this multi-Species planet. The Octopus (in fact, all cephalopods) is a remarkable, intelligent being, creative and vulnerable, just like any of us.

The Octopus teacher is not an educational endeavor but still teaches you more than you may perceive immediately.

The Highlight of this “Piece of Conscious visual art “brings an incredible message about preservation, Nonhuman personhood, Sentience, and Oneness.