Why do we ignore the suffering of animals?  Because we are methodically programmed to ignore their misery, anguish, and pain.

Become Aware of the Suffering of Animals

We arrived in this world already being deceived.  Our modern way of life created a vast scope of absurd conditioning that we end up absorbing passively as truths and part of our reality. We are induced not to question, but to accept and finally to be part of this great worldly theater of blood, pain, and constant suffering.

Until we stop harming all other living beings, we are still savages. ~ Thomas Jefferson

We cannot wake up from this immense nightmare that we promote, for our protectionism only towards certain species is there to deliver us from guilt.  Some religious perspectives strengthen our belief that we are the only one among millions of species chosen by a “God,” and the ones able to have the gift of consciousness.  Besides this, we are also indoctrinated that we have received the divine command and power over the other beings on this planet, and therefore they would be our property and belong to us as inanimate things for our disposal and inventory.

Yet there are some animals that are treated differently from others, despite their intelligence and abilities to show emotions and love. This Ideological doctrine is called Carnism.

Carnism is a concept used in discussions of humanity’s relation to other animals, defined as a prevailing ideology in which people support the use and consumption of animal products, especially meat. Carnism is presented as a dominant belief system supported by a variety of defense mechanisms and mostly unchallenged assumptions. The term carnism was coined by social psychologist and author Melanie Joy in 2001 and popularized by her book Why We Love Dogs, Eat Pigs, and Wear Cows. Jeff Mannes writes that carnism is rooted in a paradox between most people’s values and actions: they oppose the harming and suffering of animals and yet eat them. He argues that this conflict leads to cognitive dissonance, which people attempt to attenuate through psychic numbing.

Using a new modern language of power, the various levels of human society, from governments to civil societies institutionalized the human supremacy; and transformed a shared world into an exclusively human world governed by self-protection laws. The rest is the rest. 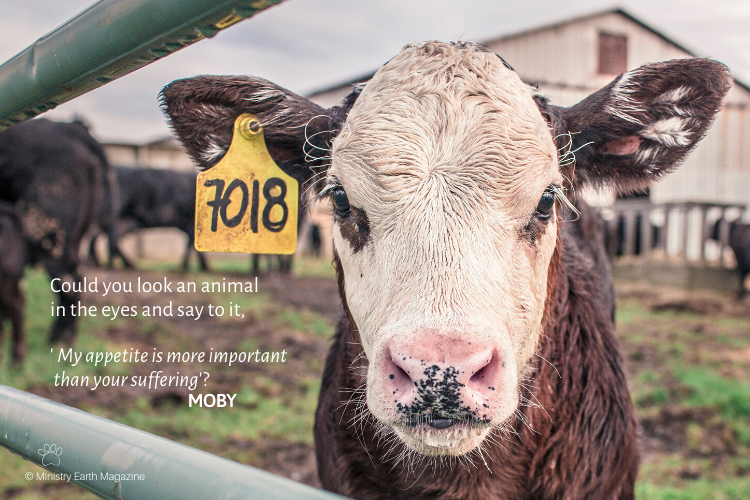 We either commit or accept passively unspeakable atrocities, and yet we are not monsters, for our vision is distorted and led to see everything in the best way, the most beautiful prism, and the most fanciful joy. We are spared from witnessing the misery at the mega industrial level that we comment on, and much of us or the vast majority do not know, or even imagine the holocaust that is promoted here on Earth by ourselves. A matter of existential sleep that many will sleep without ever waking up, until their death.

The eating of meat extinguishes the seed of Great Kindness.

The Human species, we know, is comprised of highly individualistic beings, collectively indifferent to its species, would not be different from the regard of others. We are conditionally grounded in anthropocentrism, we feel elected and special before a universe beyond infinite, with infinite possibilities, but they have become the biggest problem in the life of other species. It is a fantasy world that promotes pain for many to the joy of the few.

It is ethically questionable that we, just one species, can promote the misery of millions of other species. The funniest thing is that it can create incredible things through the beauty of human intelligence, and at the same time, we are the ones that can behave primitively through the most basic of customs dragged from the earliest times, and barbarically satisfying our hunger through the death of others beings.

A potentially deadly industry is today responsible for catastrophic damages at all levels of our environment, ranging from climate, deforestation, pollution, extinction of species, mono agriculture, drought, famine, and misery, in general, the maintenance of our appetite for animal flesh had accelerated the earthly degradation.

The point of this article is to show the numbing of our feelings and of our natural inclination towards compassion, especially where it pertains to the suffering of animals.   It is a great psychological process of constant brainwashing, inducing dumbness, and idiotization, and the promise of prompt rewards and instant gratification hardening our hearts towards millions of sentient beings of many species and even towards other human beings.

Food on planet Earth is the most profitable source that exists, and therefore, in the hands of the greedy agricultural  Business,  had made our planet, not a place to live in harmony will all nature,  but instead to survive as hungry ghosts, desperate for blood, flesh, and pleasure.

We have enough planetary wealth to satisfy the hunger of all, but not to continue to supply the greed of the few.

We have food free from cruelty, but someone or something still wants us to feed on our blood, the flesh of our flesh. Where is the feeling? Where is that something good, that would weigh in our reasons if we were free to think and feel?

We are programmed to ignore the suffering of animals. We are programmed to be fed daily by dubious, dishonest, and ethically objectionable foods. We cannot see the obvious, for the machine of illusions continues to hypnotize us, to dope us, and to make us insensible, even to the voiceless cry of pain.

We did not come to this planet here to accept the unacceptable, we came here to question, not to impose to others what we would not like done unto us. We are beings capable of thinking and feeling, but the great majority of Humanity is being guided and manipulated by an unsustainable and uncompassionate system rooted in insatiability, and greed. This system is generating such great animal suffering that no longer can be ignored or dismissed. The denial is slowly but surely killing our moral standing as the enlighten species in charge.  It is here and meteorically is killing us all in every way.