The Story of Gaia: The Big Breath and the Evolutionary Journey of our Conscious Planet

Closing my eyes and slowing my breath, I imagine the beginning of our Universe. It is black. Not the transparent black clarity of a night sky tinged by stars. Nor the blackness of squid ink, black yet with a hint of blue. But an utter and complete blackness. Not an empty void but replete with everything and the potentiality of what might come. Not a black hole, but the black whole.

It is minute, tiny almost beyond comprehension. Its wholeness at its first moment is as small compared to my body, as I am to the vastness of what it has since grown into over its 13.8 billion year- long evolutionary journey.

It is hot. A hundred trillion trillion times as hot as the interiors of its stellar progeny will be billions of years in the future. It is simple; though only as simple as it can be, to gift an eventual cornucopia of planets, plants, and people.

I am in wonder at the audacity of its visionary magnificence. How, how! could the infinite and eternal mind of the Cosmos, dream the perfect intricacy of such a thought? And why?

The Big Bang to the Big Breath

The big bang wasn’t big, and it wasn’t a bang.

Instead of our Universe beginning in the implicit chaos of a ‘bang’, it was born in a minuscule and incredibly simple and ordered state. Its laws of physics, the in-formational algorithms guiding its existence and evolution, were extremely finetuned and the relationships between its fundamental physical attributes and the associated numerical constants they embed, were exact to a meticulous degree. Had they differed from what they are, by only a minuscule amount our Universe would never have been able to even exist, let alone go on to evolve.

Its unified nature and the extreme order and simplicity of its birth had the inevitable consequence of a universal and one-way flow of time from its first moment until its last. The complementary and ongoing expansion of space and its holographic manifestation, has, ever since, enabled more and more meaningful in-formation, to be embodied within space-time and will continue to do so throughout its lifetime.

As a finite thought of an infinite and eternal Cosmos and vitally imbued with meaning, the extreme finetuning of its laws of physics instills it with an innate evolutionary impulse and essential purpose; to evolve from its original simplicity to ever-greater complexity and individuated and relational levels of self-awareness.

In doing this, our Universe embodies two universal principles that continue to guide and be way-showers in the ongoing journey of exploration and discovery. Its first underlying rule is that it is, to paraphrase Einstein, as simple as it can be but no simpler, to manifest its evolutionary impulse. The second is that within its overall conservation of energy-matter and its overall balance to zero, all sub-systems use the minimum energy possible to manifest their existence and their evolutionary impulse.

So rather than a one-off and the chaotic big bang, our Universe continues to sound the ongoing harmony in the Big Breath of its emergent potential. The Story of Gaia explores the discoveries and understanding, both leading-edge and ancient, that have progressively perceived how our Universe began and, from its earliest epoch, the long path that would eventually lead to our planetary home and the myriad abundance of the children she’s birthed, including ourselves. 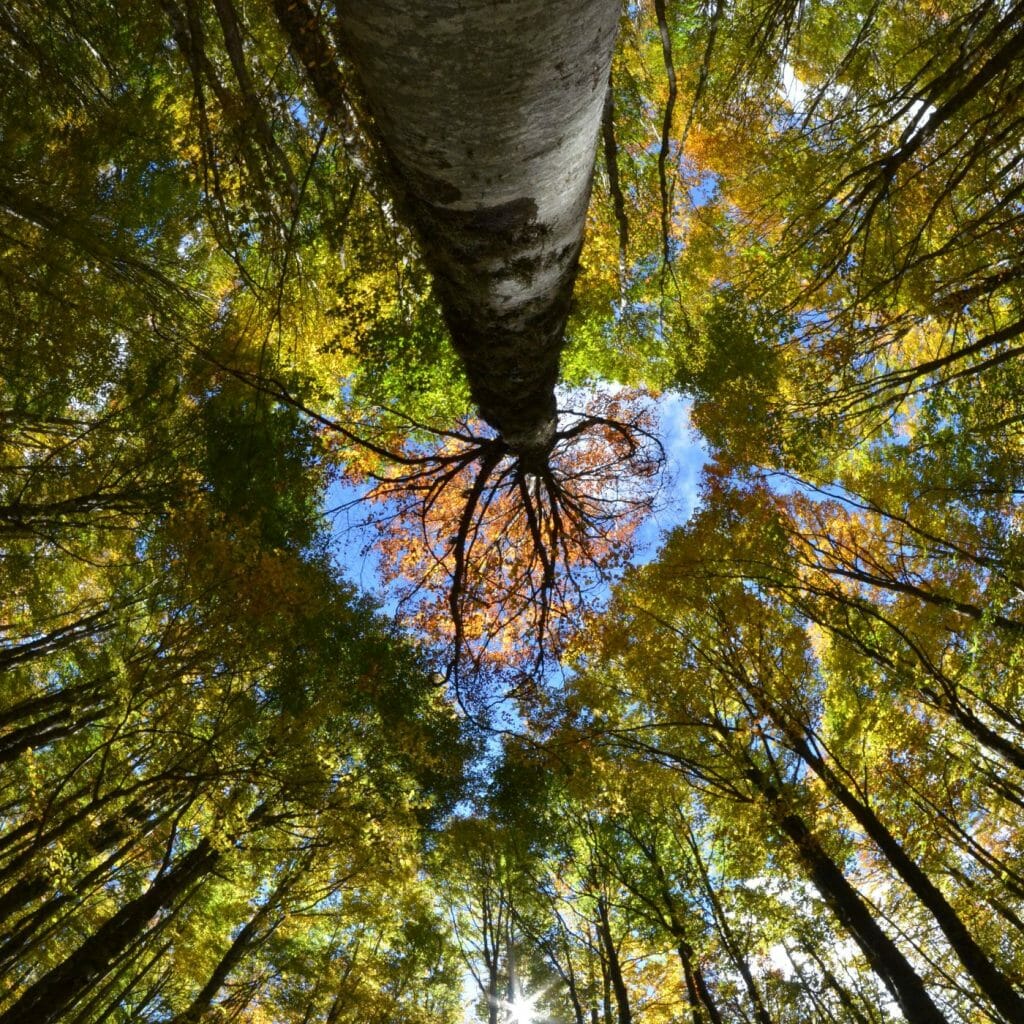 One of our most venerable wisdom traditions, the Chinese I Ching, tells that: ‘in the beginning was the one, the one became two, the two became three – and from the three, ten thousand things were born…’. From the potency of its unified oneness, our Universe realizes itself through its universal informational ‘alphabet’ of just two letters: zeros and ones. This simplest of differentiation then combines, imbuing innate meaning into all the diverse expressions of the relational two-nesses of energy-matter and space-time.

For example, the two-dimensional holographic boundary of what we call space, through the flow of time, projects the innate and evolving intelligence of the entire Universe into its appearance of three orthogonal dimensions. Our x/y/z experience of left/right, up/down, and forward/backward is woven into its semblance, rather than being merely a construct of our awareness.

Within the intrinsic properties of energy-matter, three-fold combinations of quarks make up the protons and neutrons of atomic nuclei; the familial groupings of protons, neutrons, and electrons form into stable and electrically neutral atoms, and the ubiquity of positively, negatively, and neutrally electrically charged particles and energy fields are subsumed within an overall and exactly neutral Universe.

From its beginning, our Universe has evolved from this foundational simplicity of the complexity of the I Ching’s ‘ten thousand things and more…’ From the genesis of its first moment, it was poised and expectant with all the potency of its evolutionary diversity.

Another wisdom tradition, that of the ancient Greeks, intuitively perceived the fundamental nature of numbers, geometry as a number in space, and music as a number in time, all underpinning their cosmology in a four-fold quadrivium of knowledge. Throughout Gaia’s story, the harmonic and resonant relationships and universal patterns of these teachings are now being newly appreciated as playing all-pervasive roles in the story of our planetary home and her Universe.

As a creative and finite emanation of an infinite and eternal Cosmos, the manifestation of our entire Universe through its continuing Big Breath, also reflects the ancient Vedic perspective of the Breath of Brahman. The Upanishads, a series of discourses between seers known as rishis and their students, in ancient India, sets out an integral philosophy of the unified nature of reality and all-pervasiveness of consciousness. Their Ishavasya wisdom teachings seek to guide the understanding of both the un-manifest causative realms of existence with the manifest world that the Breath of Brahman exhales and which represents the ultimate unity behind and transcendence of all names and forms.

The profound insights of these ancient scholars are being re-appreciated by ever-more discoveries of leading-edge science. Even more vitally so, the living lore of Indigenous peoples who have never forgotten the innate web of life that encompasses the whole Cosmos is now being honored as offering experiential guidance to heal our collectively dis-membered relationship with Gaia.

…. For the last 4.5 billion years of our Universe’s evolutionary journey Gaia has continued the emergence of ever greater complexity and diversity through the innate, dynamic and in-formational interconnectedness and collaboration of her entire ‘gaiasphere’ comprising her planetary geosphere, hydrosphere, atmosphere – and biosphere. Pulsed, not by passive continuity, but proactively by change and challenge, the evolutionary emergence of her biological children has not only survived but flourished. Gaia’s innate nature is far from equilibrium and the intricate collaborations of her gaiasphere are perpetually dynamic. Yet, she has managed the extraordinary feat through all this time, of not only providing a planetary home for her organic children, but opportunities for them to explore, communicate, learn and grow in complexity, diversity and individuated self-awareness.

Over this time, she has dealt with our sun, Sol radiating some thirty percent more brightly than when she became a young planetary mother. Yet she has succeeded and, despite the immense trials of regulating the interlocking and themselves evolving cycles of her entire gaiasphere, to continue to provide a breathable atmosphere, liquid water, resource-rich land and temperate climate, to sustain and nurture the evolution of her organic children.

As a mother herself she embodies profound wisdom. She only uses the energy needed for all she achieves. She fits form to function with underlying simplicity, exquisite beauty and intricate precision. She recycles everything with no waste. She shares and in-forms her skills locally and globally. She embodies collaboration thoughout her biosphere; appreciating healthy competition and encouraging holarchy cooperation. She exults in diversity and knows it to imbue resilience and collective genius. And she exists, evolves and thrives within the wholistic limits and emergent opportunities of her planetary gaiasphere.

And she’s been doing so for over four billion years. 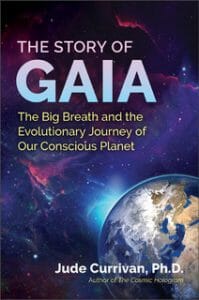 Her story has taken her and her organic children from single cells to organisms embodying trillions of cells; to the distributed intelligence of slime molds, the extended cognition of bats and spiders, the eusocial communities of bees and termites, to the dreaming of dinosaurs, the flights of birds, the dialect-rich songs of whales and the laughter of hominins.

Progressively, she’s guided emergent in-formational networks of complexity and sentience and with distributed and coherent multi-level intelligence. Their signaling capacities; whether the mycelium wood wide web of an entire forest or the intricate nervous systems of animals, enable such coherence to prevail. And the neural hubs of the nine brains of octopuses, empowering their eight arms to operate independently, the thirty-two brains of a leech, and the encephalized ones of birds and land and marine mammals, testify to their complex reasoning abilities. Alongside, and beyond intellect, however, Gaia has progressively nurtured empathy and emotional attachments in her biosphere. In the cooperative and loving relationships of mates, parents and offspring, families and communities, she has embedded circles of caring. Bacteria, insects and fish cooperate to look after others of their communities, especially the vulnerable. And in the altruism observed in rats and monkeys, the grieving of elephants not only for their own kin but for a human carer, the self-sacrifice of a human stranger, and the protection by humpback whales from others not of their own species; the circles of care further expand as spirals of compassion.

As a planetary mother, even when faced with the extinctions and devastation, she not only endured but resolutely recovered and went on to continue to serve the Universe’s and her own indomitable evolutionary impulse.

As I’ve continued to seek a deeper sense of how our Universe is as it is, a possible answer as to my question of why has also emerged.

It tells of a Universe that learns through its holographic and holarchic manifestation. And through its explorative, experiential and evolutionary reflections to further know itself. Its innate Unity, through the co-creative appearances and tensions of its dualities with their universal masculine and feminine attributes, then reconciles in the trinities of their child expressions. Their flourishing, in the diversity and complexity of its ongoing journey, will eventually come full spiral; from Unity to Unity in diversity, to a re-membered Unity in belonging, and an ultimate return to Unity.

We are the youngest of Gaia’s organic children and the only ones left of our family of hominins. We embody her legacy and that of our entire Universe’s evolutionary arc and we stand together with them at the bow wave of their and our next emergent possibility.
We are the last of our kind, yet, we are not alone.
We and her entire family, are all Gaians.

Jude Currivan, Ph.D., is a cosmologist, futurist, planetary healer, member of the Evolutionary Leaders Circle, and previously one of the most senior businesswomen in the UK. She has a master’s degree in physics from Oxford University and a doctorate in archaeology from the University of Reading. She has traveled extensively, worked with wisdom keepers from many traditions, and is a lifelong researcher into the nature of reality. She is the author of 6 books, including The Cosmic Hologram, and is co-founder of WholeWorld-View. http://www.judecurrivan.com/