The Ethics of Care is a normative ethical theory that holds that moral action centers on interpersonal relationships and care or benevolence as a virtue. [1]

Bioethics – The Ethics of Care

Ethics of Care holds that the basis for our ethical concerns should be our emotional responses to these concerns. In this line, it also argues that special relations generate special moral duties, something that other theories (primarily those that defend impartial considerations in the ethics) reject. The Ethics of Care is one of the perspectives of contemporary ethics that emphasizes emotions and human relationships in contrast with the so-called ethics of justice, which deals with principles and rights.

The philology of the word ‘care’ points to its derivation from the Latin Cura (Curative), which is a scholarly synonym of care. In the earliest form of Latin, the word “Cura” or “Care” is written in a context of love and friendship, to express an attitude of attention, concern, consideration, and devotion for the loved one or a pet. Philological studies indicate another origin for the word ‘care,’ deriving it from cogitare-cogitatus, which means to cogitate, to think, to pay attention, to show interest, to reveal an attitude of care and concern. As can be seen, the nature of the word ‘care’ includes two basic meanings, closely related to each other: the first is an attitude of care, caring and attention to the other, and the second concern and concern arising from the involvement and relationship with the other by the caregiver. Thus, it seems that the philology of the word ‘care’ indicates that caring is more than a singular act; it is a way of being, the way one structure and realizes oneself in the world with others. It is a way of being in the world that establishes the relationships that are formed with things and people. 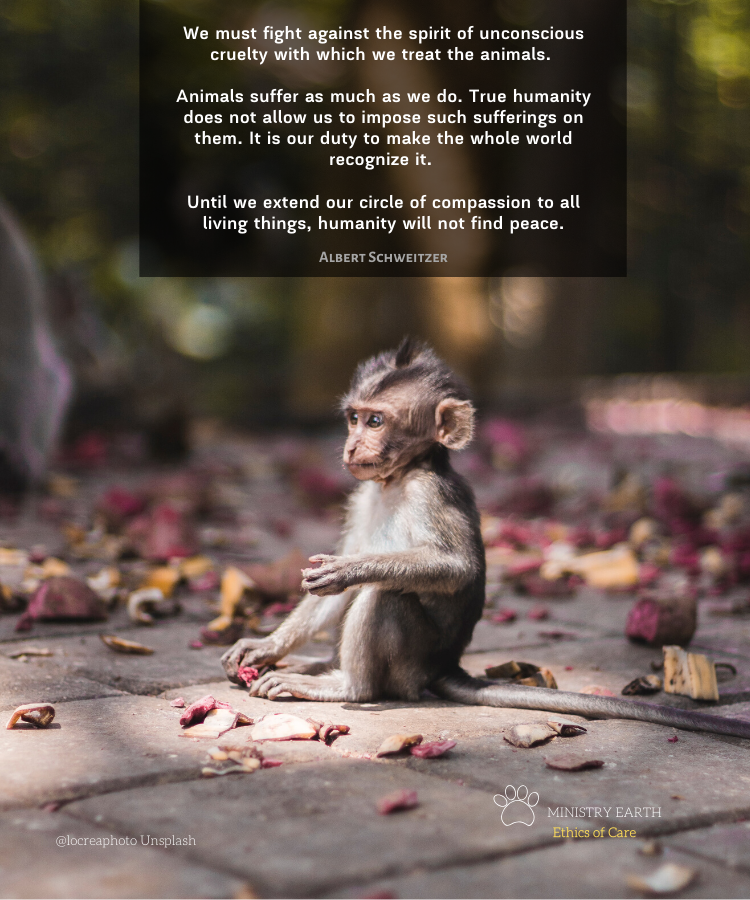 One might think that because of this, the Ethics of Care could provide a basis for an anthropocentric point of view that excludes non-human animals. The reason would be that, since we generally have stronger relationships with humans, we should give priority to their interests and pay less attention to the welfares of nonhuman Beings.

I am in favor of animal rights as well as human rights. That is the way of a whole human being. ~ Abraham Lincoln

This argument was rejected by advocates of the consideration of nonhuman animals from care ethics such as Josephine Donovan and Carol J. Adams. Donovan argued that we cannot be considered careful agents if we do not meet the interests of beings we know are suffering. Being a thoughtful or cautious agent implies a solidarity response to this suffering. Therefore, we must concern ourselves with the interests of all those who are able to suffer or experience joy, i.e., all sentient Beings. Thus, some theorists of care ethics have in fact proposed not only duties we can have towards non-human animals with whom we relate, but also to those with whom we do not link directly, such as animals living in wild environments.

In one of his works addressing the question of Ethical Conscience, the writer Umberto Eco emphasized that “the ethical dimension begins when the other enters into the picture.” There is an agreement today among scholars that without a minimum of fundamental consensus as to values of Life, it is not possible for the existence of a greater communion nor a dignified human coexistence.

We should mention the need to care about our planet to start with: Care with the land, our air, and bodies of water: our “commons” [2] or shared resources with our communal home, which is threatened by numerous problems, including contamination of water, air, and soil, predatory deforestation, extinction of animal species, etc.

In the recent “Earth Letter” drawn together by personalities of scientific thought, this concern and care for the Earth were at the center of attention: “We must abandon our isolated positions and take care of our common home, our planet Earth. There is too much violence, injustice, suffering, and poverty in our world. We have to change this course. ”

There is a need for the adoption of a “responsibility principle”: a new ethic based on caring for the future, affirming Human Rights and Nature Rights (Animal Rights), solidarity, Oneness, freedom, justice, and peace.

The second element to consider would be the care for others: openness to others as a preventive action against indifference and apathy. Respect for their dignity and conscience and the affirmation of joint responsibility for the preservation of our species. This type of attitude facilitates balance, harmony and Social Justice.

Not to hurt our humble brethren is our first duty to them, but to stop there is not enough. We have a higher mission – to be of service to them whenever they require it. ~ Francis of Assisi

If we had to take care of the people with whom we have stable relationships, we would take care of very few individuals, only. In this logic, we would not take care of the overwhelming majority of humanity since we have no relation to them. In fact, many people even have a closer relationship with some non-human animals than other Human beings. If we were to make connections the basis for care, then we would have to accept ethically the neglect of the majority of humanity, as well as the regard that some nonhuman animals deserve more consideration than many humans. An alternative to this is, of course, to reject the relevance of relationships for the attribution of moral concern, even if it means denying a part of what care ethics stands for.

Our time lacks an “ethic of compassion.” We cannot understand how human beings can remain indifferent to such a disturbing history, where living conditions and violence prevent the affirmation of the dignity of all sentient beings on this planet.

For our society to evolve – in fact, for our society to survive – we need to instill the Ethics of Care into both our private thought and public actions, in order apply that care beyond our immediate environs to Humanity as a whole, the planet as a whole, as well as all of its non-Human inhabitants.

[1] Wikipedia [2] The commons are the cultural and natural resources accessible to all members of society including natural materials such as air, water, and a habitable earth.

This article originally appeared on OMTimes.com