Mottainai: Everything has a Soul

Most people have heard about how Japanese people live in an organized society and are concerned with environmental issues. They are organized carefully with students’ cleaning classrooms, the separation of waste for selective collection, to the responsible use of water resources. Most of us are unaware that all this socio-environmental awareness is deeply related to Mottainai philosophy.

Every second he breathed, the smell of the grass, the cool air on his face, was so precious: To think that people had years and years, time to waste, so much time it dragged, and he was clinging to each second. J. K. Rowling

THE WORD “MOTTAINAI” – DO NOT WASTE

Simply translated as “don’t waste” or even as “every little thing has a soul,” mottainai philosophy is powerfully present in Japanese culture. It refers to the general feeling of regret for wasting something precious.

All the principles of heaven and earth are living inside you. Life itself is truth, and this will never change.
Everything in heaven and earth breathes. Breath is the thread that ties creation together.
Morihei Ueshiba

Everything is connected to everything else. Everything must go somewhere. Nature knows best. There is no such thing as a free lunch.
Barry Commoner

Mottainai, in its full sense, refers not only to feelings about the material waste but also to the thought patterns that give rise to the action that generates waste of any kind. This philosophy also speaks of other types of waste, including emotional and spiritual; For example: Leaving a grain of rice on the plate is considered a profound disrespect according to the Mottainai Spirit.

But, a mind empty of ideas or a heart void of feelings or full of rude emotions can also be considered “mottainai” (waste). Throwing away things that could be reused or transformed into something new and usable is also regarded as mottainai, in the Japanese view. “Mottai” is a word of Buddhist origin and refers to the essence of things and how they came into existence globally. The word even suggests that not even objects exist in isolation but are connected to each other. For most of the Eastern religions, there is a belief that everything and everyone is connected.

The suffix “nai” means negation, so “mottainai” is an expression of regret at the possibility of misunderstanding the bonds that connect all living and non-living entities. Mottainai is an appeal for these invisible ties to be reestablished, reaffirming the importance of treating all animated and inanimate objects with great care, in a sensible, conscious, and responsible manner.

Japan, for example, developed this concept based on a lot of pain and suffering. As it is a densely populated island, Japan has limited natural resources, with few productive lands for cultivation. As a nation, Japan had undergone terrible trials, such as extreme poverty, hunger, wars, and natural disasters. The Japanese have learned to value everything that may seem insignificant for the rest of us, even a grain of rice.

Like the Wabi-Sabi philosophy, the Motainai philosophy can help us understand the way the Japanese think and relate to Nature and Society and teach us invaluable lessons on these issues.

You May Like to Read: Conscious Living Is Our Ecological Duty 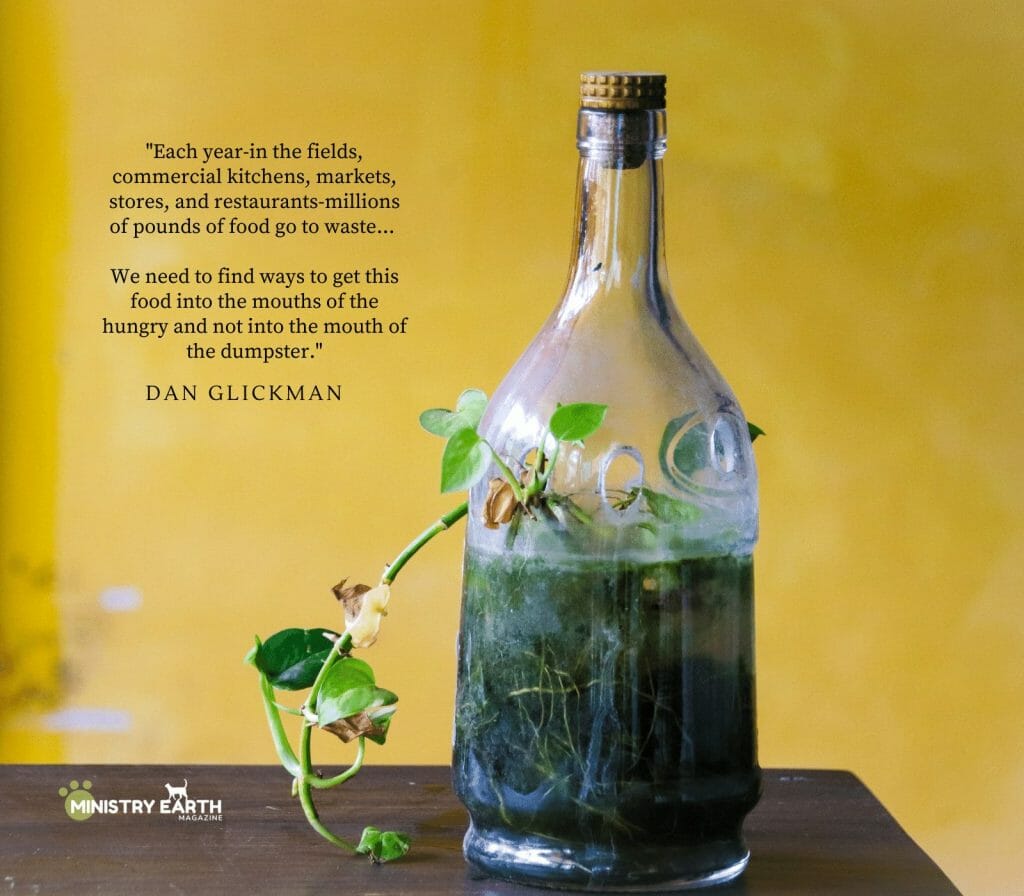 The Japanese mottainai spirit values all the intrinsic value of an object and expresses regret for the waste.

An example of the concept put into practice is the “boron” sewing technique, which used the sashiko embroidery stitch to mend fabrics, gathering pieces of cloth and recovering pieces that would otherwise be wasted. With boron and sashiko, each flap was used until it ran out. The sewing technique allowed a piece of fabric to last a long time and be used until the end of its useful life. It was common for a piece to start as a kimono, for example, to become a day-to-day outfit, then a pillowcase, a bag, and finally end up as a floor cloth, completing the full use of the material, precisely in the mottainai way. The issue of selective waste collection, taken very seriously in Japan, fits into the mottainai spirit since recycling is a way to avoid wasting resources already produced, allowing waste to take on new forms and have unique uses. But not just that. In Japan, waste plants are equipped and prepared to take advantage of any type of waste, even producing adequate clean energy.

“It is not enough to acquire wisdom; in addition, it is necessary to know how to use it.” Cicero

THE USE OF 4RS

The appreciation and respect for nature, also present in encouraging the use of clean energy, are part of the practice of mottainai, and it is in this context that the Japanese practice the “4Rs”: Rethink use and expense; reduce waste; reuse finite resources; refuse, and recycle what is possible while respecting the environment in which we live. However, these practices guided by the mottainai spirit can be adopted by anyone. These are simple actions that avoid wasting all resources. In Japan, not leaving a grain of rice on the plate is one of the first steps in this philosophy’s direction.

The Big Breath and the Evolutionary Journey of our Conscious Planet

Taking small portions of food, avoiding food waste is a maxim in a world with alarming numbers of still hungry people. In a country that had already faced challenging periods, such as wars, famine, typhoons, and earthquakes, Japan has a territory with scarce natural resources. The Mottainai philosophy has become essential to the development and, consequently, economic growth. Far from being an institutional practice, mottainai can bring about real changes in our lives’ particularity. However, when multiplied in the logic of community life, individual actions can be even more impactful as they were for Japan in the sum of small daily activities. The concepts of sustainability so widespread in the West today, perhaps, deep down, are expanding mottai philosophy to the world.

Every day think as you wake up, today I am fortunate to be alive, I have a precious human life, I am not going to waste it. I will use all my energies to develop myself, expand my heart out to others, and achieve enlightenment for the benefit of all beings. I am going to have kind thoughts towards others. I am not going to get angry or think badly about others. I am going to benefit others as much as I can. Dalai Lama

KEEP IN MIND THE 4RS (RETHINK, REDUCE, REUSE, AND RECYCLE)

Rethink the need for the things you think you need, about their value, quantity, and usefulness. Reduce unnecessary consumption and waste of everything from water to electricity. Reuse whatever is possible, from plastic bags and packaging to fabrics and food that would be unnecessarily rejected. Refuse any excess from paper or plastic bags in supermarkets. Mainly recycle your way of life and your ideas, and old behaviors.

If you have a garden, consider composting, for example. It is possible to do so, even with the small or in the backyard. 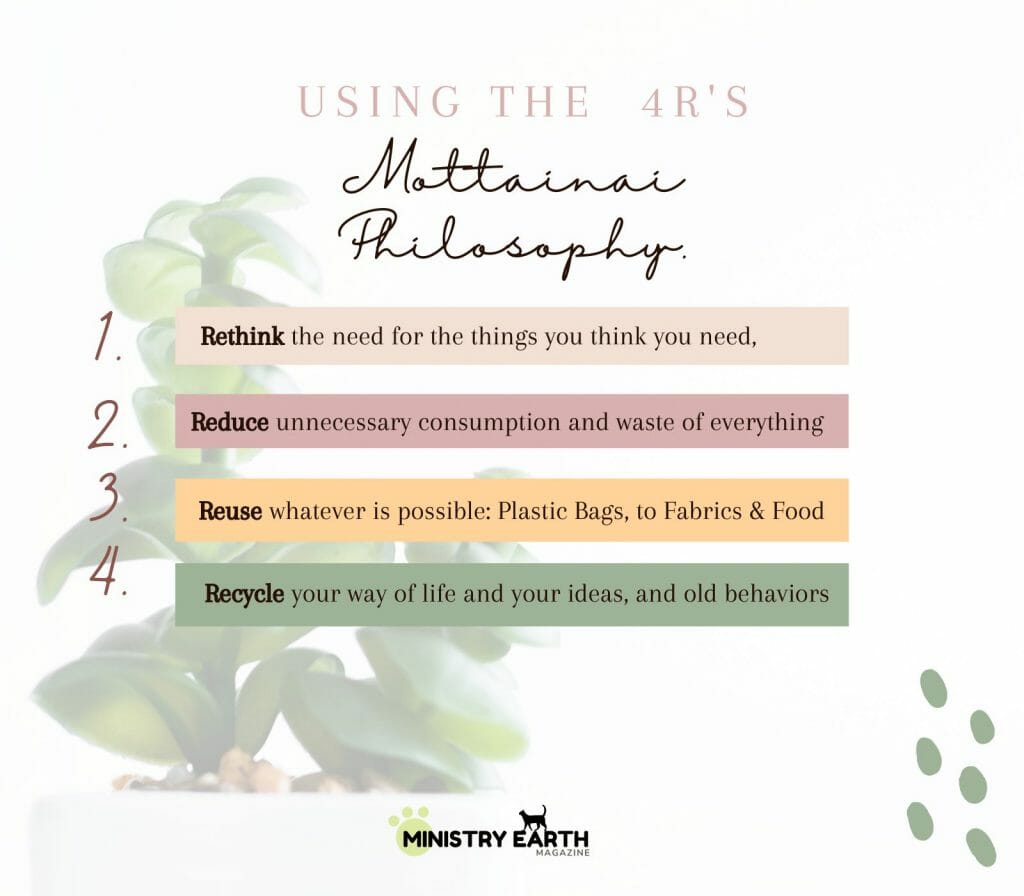 ALWAYS REMEMBER THAT 4RS CAN BE APPLIED EVERYWHERE

The 4 R’s can be applied to both objects and food. Old pants can quickly become carpets, sofa covers, or returnable bags. Natural leaves, stems, bark, and seeds whose nutritional value can be used in surprisingly delicious recipes.

Often the changes we make at home (such as waste selective collection) can be extended to our condominiums or residents’ associations. That these ideas can be brought to the responsible representatives and bodies. Find out about the public policies of your neighborhood and your city. An email sent to the authorities can result in significant changes. We never know.
The various initiatives that Japan has taken to collect and reuse the small natural energies around are also a sign of the ecological spirit of the Mottainai concept. This is a concept that Japan can be proud of and that the USA and many other countries should learn and follow.

[No] matter what a waste one has made of one’s life, it is ever possible to find some path to redemption, however partial.
Charles Frazier