The Mysteries of the Aokigahara Forest

Aokigahara (青木 ヶ 原) is a 35 km² forest found at the base of the great Mount Fuji. It is also called Jukai (树 海), which means “Sea of Trees, “but it is also called by other names such as Maldivian Forest, Black Forest, and Suicide Forest.

It got this name because it is one of the most wanted places for suicides in Japan and the 2nd place where most suicides are committed. Aokigahara Forest is second only to the Golden Gate Bridge in San Francisco, California, USA.

Every year, 70 to 100 bodies are found in the Aokigahara Forest. It is also believed that many others may still be in the Forest and has not yet been discovered.

Because of this disturbing fact, the Forest is still considered “haunted.” It has many legends about ghosts, those to be the spirits of the people that had committed suicide. The mysterious reputation increases, with monsters and demons from Japanese mythology. All these creatures are also supposed to live in that Forest.

They say that mountain rocks contain large iron deposits that cause errors in compasses. This was supposedly making it extremely easy for people to get lost in the Forest. However, these legends are false, as the iron’s magnetic field is too weak to have a significant effect.

These military forces from Japan and the United States regularly carry out training exercises in the Forest. The GPS, compasses, and other electronic guidance devices work perfectly. 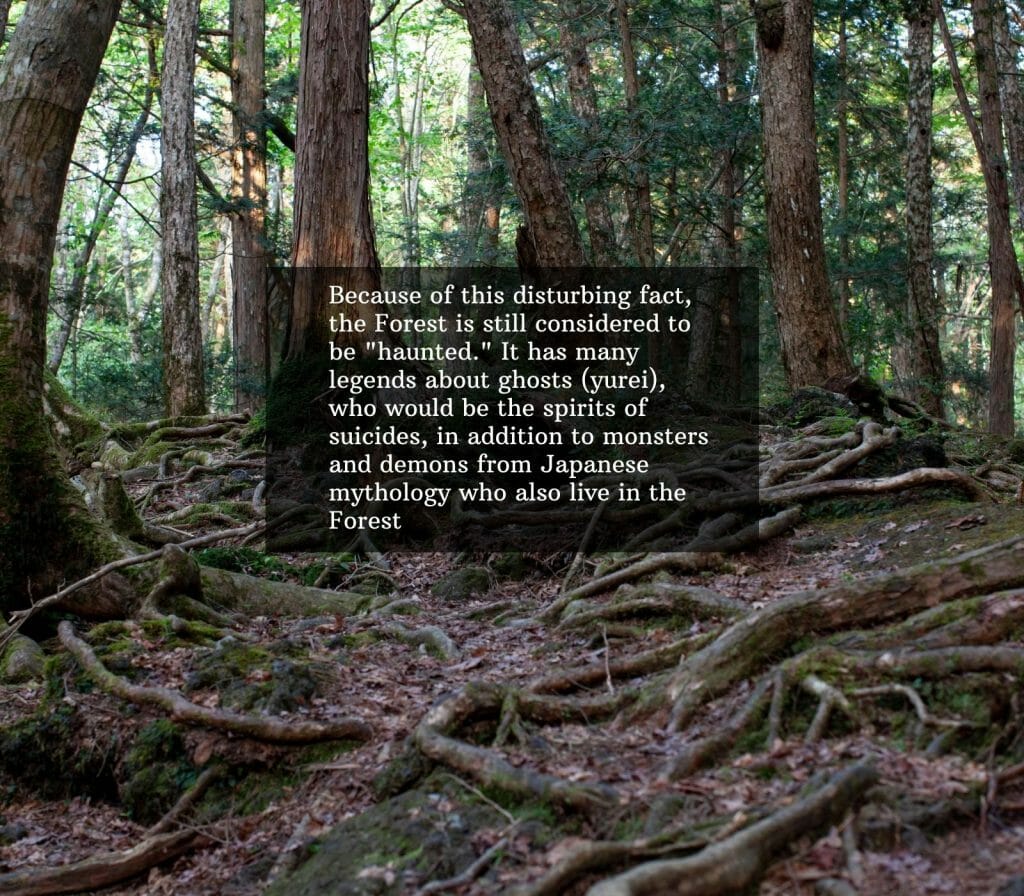 Why did Aokigahara become the sort after place for suicide?

Due to the large number of trees that block the light and an absence of wildlife, the Forest is frighteningly dark and silent.

Perhaps that is why it is considered by many to be “the perfect place to die,” which leaves the Forest more terrifying than it already is.

Interestingly, although it seems to be one of those places that few wish to visit, the Forest full of legends and mysteries has attracted many onlookers.

The place gained great popularity because of a novel by the writer Seicho Matsumoto, published in 1960, called Kuroi Jukai (the Black Sea of Trees, in a free translation).

In Romeo and Juliet’s style, the story ends with a couple of lovers committing suicide in that Forest. There was an increase in suicides after the novel was published, it is evident that many cases of suicide happened previously at the place. The Forest was already associated with death long before the book’s publication.

Ubasute (姥 捨 て), for example, a Japanese tradition widely practiced during the 19th century. It consisted of taking the elderly and the sick to a forest or the top of a mountain, leaving them there until they died of hunger or cold.

The Forest has so many bodies that Yakuza pays homeless people to enter the Forest and steal the corpses. Forest is very dense, it is difficult for the police and authorities to search for bodies.  Many preventive measures have been taken to reduce the number of deaths and thus lose the unpleasant title.

Since 1950, the site has recorded at least 30 suicides each year. In 2002, 78 bodies were found, replacing the earlier record of 73 from 1998. In 2003, the rate rose to 100. Still, in recent years the local governments have stopped releasing the figures. Everything is part of an effort intending to untie the Aokigahara forest with the term suicide.

In 2004, 108 people killed themselves in the Forest. In 2010, 247 people attempted suicide in the Forest, 54 of whom were successful. During the 1970s, the high suicide rate led a group of police, and journalists onto an annual Forest search for missing persons.

The authorities also began to put several signs and posters in the Forest, written in Japanese and English. The Signs are asking people who have come there to commit suicide, seek help first, and not take their own lives. There is also a project to conduct warning lectures at schools and companies all over the Island of Japan.

Besides the government, some companies have created projects to try to contain the flow of people looking to commit suicide. An example of the Japanese Intervention would be installing blue lamps on some train station platforms of the Keihin Electric Express Railway Company. According to the company, the blue color would have the power to “calm” people down.

Incredible enough, the strategy has been working. Since the lamps (lights) were changed, there were no more suicides on those platforms. Other railway companies are following suit and have also started to install blue lights for a trial period.