Staff Sergeant Person B. Griffith IV Ret (Griff) is the Veteran who starred in the IMAX film, Superpower Dogs with her 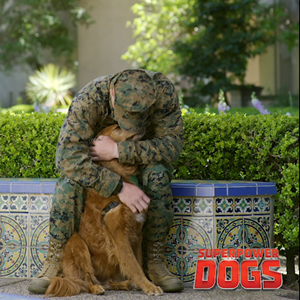 Griff is Ricochet’s costar in the IMAX film, Superpower Dogs now showing at theaters that have finally re-opened, and is on Hulu as well. The Service dog, Ricochet worked with Griff as a therapy dog which ultimately led to their co-star status in the film.

Ricochet as a New Dog Teacher

The puppy, Balboa was named after the place that brought Ricochet and Griff together.

Due to the stay-at-home orders and social distancing brought on by the Covid-19 pandemic, Ricochet’s therapy dog work with the military, as well as her canine-assisted surf therapy and adaptive surfing were suspended in March of 2020.

The Effects of the Pandemic

After two months, Judy Fridono, Ricochet’s guardian noticed that she appeared aloof and depressed. “Ricochet’s entire life had been remarkably busy providing in-person support to others. 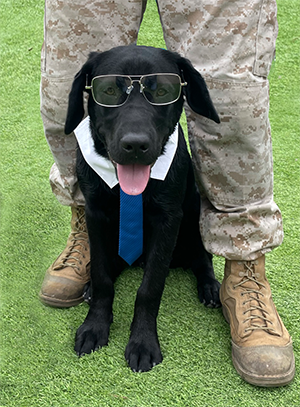 But when Covid arrived, everything came to a complete stop. Because Ricochet had too much time on her paws, coupled with her need for human interaction, I was afraid she would not survive the pandemic. She’s 13 ½ years old now and I worried she would feel her life no longer had meaning and would check out,” said Fridono.

That is when Fridono, a service dog trainer had the idea of enlisting Ricochet’s help in the training of a PTSD service dog puppy for Griff. Training is time-intensive… and they certainly had an over-abundance of time. So, Ricochet became a mentor to the puppy, and the puppy became a paw·té·gé to Ricochet!

Griff served our country, kept us safe, sacrificed family, and so much more. But, he returned home fighting another debilitating battle, PTSD.

Working with the Wounded vets and those with PTSD

Military recruits go through rigorous training to learn how to fight a war, but nobody teaches them how to come home after experiencing horrific battlefield atrocities. Every 65 minutes a veteran takes their life by suicide. That’s one of the reasons Ricochet is helping Griff continue his healing journey with a service dog. She is committed to helping him in his recovery through the tremendous healing that comes with puppy breath!

The things Griff experienced and saw in Afghanistan are too horrific to utter out loud… but Balboa will know without Griff saying a word. Balboa will know when Griff is anxious, having a panic attack, or a night terror. The new dog Balboa will know how to calm Griff and help him navigate further through recovery. The new guy will know because Ricochet will teach him.

Recognizing Griff’s service to our country, Ricochet is providing Balboawith Help. The help is at no cost to him with the help of her supporters.

The cost of raising and training a puppy to be a service dog for a veteran is not cheap. In fact, it can run upwards of $25,000. This includes training, placing, providing support, vet bills, wellness checks, food, treats, bones, supplies, grooming, vaccinations, license, monthly preventatives, wellness checks, team training, and other miscellaneous expenses. But just as importantly, Ricochet’s legacy will live on through Griff and Balboa… and that is priceless!

To learn more about Ricochet, go to surfdogricochet.com and follow her on social media at @SurfDogRicochet

You May Want to Read:

ABOUT RICOCHET Ricochet is a certified therapy dog, the first-ever surf therapy dog. As an accomplished dog, she is a champion surf dog, and celebrity star of the IMAX film, Superpower Dogs. 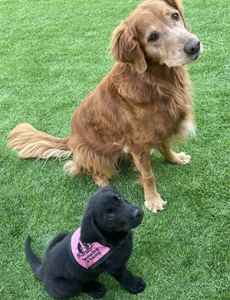 The Beloved Ricochet has won scores of awards for her substantial work in human-animal intervention and healing. It also provides canine-assisted surf therapy and adaptive surfing to kids with autism and other special needs. Ricochet has been able to help differently-abled individuals, wounded warriors, and veterans with PTSD.