Psychologists interested in responding to climate change point out that the very nature of the causes of global warming works to sideline our moral judgments, making it even more difficult to get people to respond to triggers involving either guilt or shame. No one, not even the people working directly in the fossil fuel industries, wants climate change to occur. Certainly, every other working parent with a morning routine like mine is simply trying to make it work in one piece rather than actively trying to increase global temperatures.

Climate change is being caused by our behavior. This is resulting from all the energy we use to live our modern Western lives. But we perceive it as just a side effect, collateral damage. If we see it at all.

Looking at climate change as unintentional harm is important. Humans tend to place huge moral significance on whether someone causes harm deliberately or not. Perhaps that’s why we’re so fond of saying to someone we’ve hurt, ‘I didn’t mean to hurt you,’ as if the intention was the lion’s share of the crime. Intentional acts provoke powerful emotions; unintentional acts less so. And with unintentional acts, there’s no villain, no individual to blame, just good people trying to do their best in a bad situation.

Despite the downsides of either guilt or shame, they have long been part of the emotional toolkit for climate change communicators. In Don’t Even Think About It, George Marshall argues that this, in part, is a consequence of climate change being the main advocacy issue for green groups, so it comes with all the positive and negative baggage of the environmental movement. 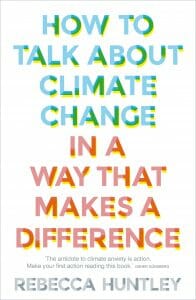 People who don’t identify as environmentalists can sometimes view them as professional complainers, killjoys and worry warts, always focused on banning and stopping things.

There is almost a puritan ethos of disapproval hanging over environmental messaging. Everyone seems very woke. Stoknes comments that the condemnatory tone of a lot of climate communication has created strong associations with shame. ‘Climate images and messages indirectly underscore that I should feel bad about the way I live.’3 Deniers and those seeking to undermine the climate change movement know that painting environmentalists as grim foot soldiers of the nanny state is an effective strategy.

Another effective tactic is highlighting the CO2-emitting behavior of celebrity environmentalists. Al Gore has a private jet! Emma Thompson eats beef carpaccio! Leonardo DiCaprio has too many disposable girlfriends! Deniers understand enough about how humans respond to guilt and shame to know that letting us off the hook for our choices and attacking rich and famous greenies will be an easy win for them and a cheap thrill for us.

While I don’t believe environmentalists’ characterization as judgey zealots is fair, I understand why people respond the way they do to messages aimed at making them feel responsible for behavior that harms the environment. I see it in focus groups every day. When some people in my research are confronted with the impact of human-caused climate change—especially those who are cautious and doubtful about the issue in general—their first impulse is to blame-shift.

They minimize their own impact: ‘My impact is nothing. Especially when compared to the big corporations.’

Climate Change and The Nations’ Responsibility

They justify inaction by emphasizing the imagined inaction of others: ‘I’m doing my best, but I know people in China aren’t.’ And they point out the things they are doing to show that they’re in fact doing the right thing overall: ‘I recycle, so I’m doing my bit for global warming.’

It’s important to note that shame reactions to climate messages are more pronounced in wealthy countries, especially those contributing the most to climate change. Suppose you live in Zambia or Kiribati, and you know your country contributes almost nothing to global CO2 emissions. In that case, you have nothing to feel bad about. In contrast, people living in wealthy countries know that their much-valued life is under scrutiny because of climate change. As Stoknes comments, ‘for most people in rich countries, the climate message . . . is uncomfortable to live with’ because ‘it tells us that we are partly at fault for the destruction of the planet’.

Changing Lifestyles to save the planet.

On the bright side, that Pew study also showed that a good majority of us around the world (67 percent) believe that lifestyle change is required to address climate change. As opposed to believing the problem can be managed through technological solutions alone. While there were regional and country-based differences regarding support for lifestyle changes over-improved technology, it’s heartening to know that most of us understand we need to make changes to our lifestyles.

But a worrying aspect of this focus on lifestyle change works to increase specifically our shame response. Namely, that in affluent countries like Australia, action on climate change has narrowed down to what each individual. And also what they can do around their own home or when they go shopping. A lot of emphases has been placed on the domestic sphere, with the individual as the agent of change. Marshall explains why this has emerged as the focus for a lot of climate change messaging:

According to ‘self-perception theory’, behaviors are an important cue for self-image. If someone can be persuaded to adopt environmental behaviors, [they] may over time come to identify [themselves] as someone with an environmental worldview . . . On this basis, in the early 2000s, environmental organizations began to focus increasingly on the personal responsibility of consumers for climate change . . . To bring it home, they distilled personal actions into lists of household hints.

There is nothing wrong with encouraging people to be more aware. Aware of the chemicals, water, and energy they use in their homes or to get them to compost and recycle.

But I sometimes feel that climate change messages that address citizens just as household managers or consumers are too narrow to be effective. There is a limit to how much personal and household behavior change can bring about a rapid move to a low-carbon economy without a policy framework and action from big corporations and the government.

This goes back to my point that constructive guilt emphasizes collective responsibility. In contrast, shame tends to point the angry, quivering finger at the individual. Sometimes I come across climate communications that look like they’ve been written by the love child of Martha Stewart and Al Gore, a long list of new and potentially time-consuming edicts about how I need to run my home, feed my family and shop for personal items. For those feeling stressed, exhausted, overwhelmed, and powerless in their life as it is now, saving the planet seems to involve a lot of new products and more time spent on a home that already feels messy and expensive to run. And if I’m using my own research with Australians as a guide, people feel pretty ashamed about their homes’ state to start with.

Rebecca Huntley is one of Australia’s most experienced social researchers and former director of The Mind and Mood Report, the longest-running measure of the nation’s attitudes and trends. She holds degrees in law and film studies and a Ph.D. in gender studies. She is a mum to three children. It was realizing she is part of the problem older generation that caused her change of heart. She dedicated herself to researching our attitudes to climate change. She is a member of Al Gore’s Climate Reality Corps. Rebecca carries out social research for NGOs such as The Wilderness Society and WWF. She writes and presents for the ABC. This is her sixth book.

Copyright 2021. Reprinted with permission from Murdoch Books, an imprint of The Quarto Group. Originally Published by Murdoch Books, Extract from Pages 72-77