Animal Communication: Do You Talk to Your Pet?

Saint Bernard of Menthon and his Wonder Dogs

Saint Bernard of Montjoux (Italian: San Bernardo di Mentone) or Bernard of Menthon was probably born in Italy. He became a priest, and then he was made Vicar General of Aosta, and spent more than four decades doing missionary work in the Alps. He is credited to be the founder of the famed hospice and monastery which has served travelers for nearly a millennium as a refuge in the most dangerous part of the western Alps.

Since the most ancient times, there has been a path across the Pennine Alps leading from the Aosta Valley to the Swiss canton of Valais. The traditional route of this pass is covered with perpetual snow from seven to eight feet deep. It drifts sometimes accumulate to the height of forty feet. Although the pass was dangerous, especially in the springtime on avalanches, French and German pilgrims often used it on their way to Rome.

This is called Saint Bernardo’s pass, the most famous pass through the Alps in the history of Italy, through which Napoleon passed with his troops, determined to conquer the territory.

The Witness of the dangers of the passage and pilgrims involved in storms or hit by small avalanches was buried in the snow. This way, Saint Bernard created this inn; he placed some disciples there, in the middle of the eleventh century, on the top of the mountain.

The monks also began breeding dogs who’d be perfect for the sorts of mountain rescues needed in the area. The breed that resulted — now known as St. Bernard — is an enormous dog with a low-hanging, heavy tail and a white coat with red or brown brindle, and black around the face. Their temperament is that of a “gentle giant” — calm, sweet, and wonderful with children. These beautiful animals are often shown in pictures sporting little wooden kegs around their necks with which to bring brandy to the stranded in order to revive them.

Thus, were born the Augustinian Canons of S. Bernardo. Together with their mountain dogs, he would become the guardian angels of the valley, saving countless people. 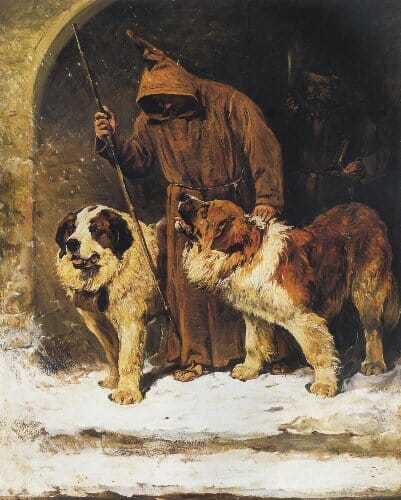 A Work of love expressed in Art

The famous painter John Emms portrays them in the 19th century, fixing the friars ready to leave for their mission. The Molossus (Greek: Μολοσσός) (also known as the Molossian hound, Epirus mastiff or molosser) was a breed of dog from Ancient Greece. The Molossus Dogs that accompanied the religious are now known worldwide as the Saint Bernard dogs, owing to their name precisely to the saint, who, having experienced the kindness and strength of these animals, adopted them as rescuers, training them.

In one of the paintings, entitled “The help” two friars are seen ready to defy the storm to reach those in need. They are preceded by their dogs, one of which carries the proverbial barrel of brandy. Although this is an unavoidable attribute for the São Bernardo, it is said that its use for aid is a legend. 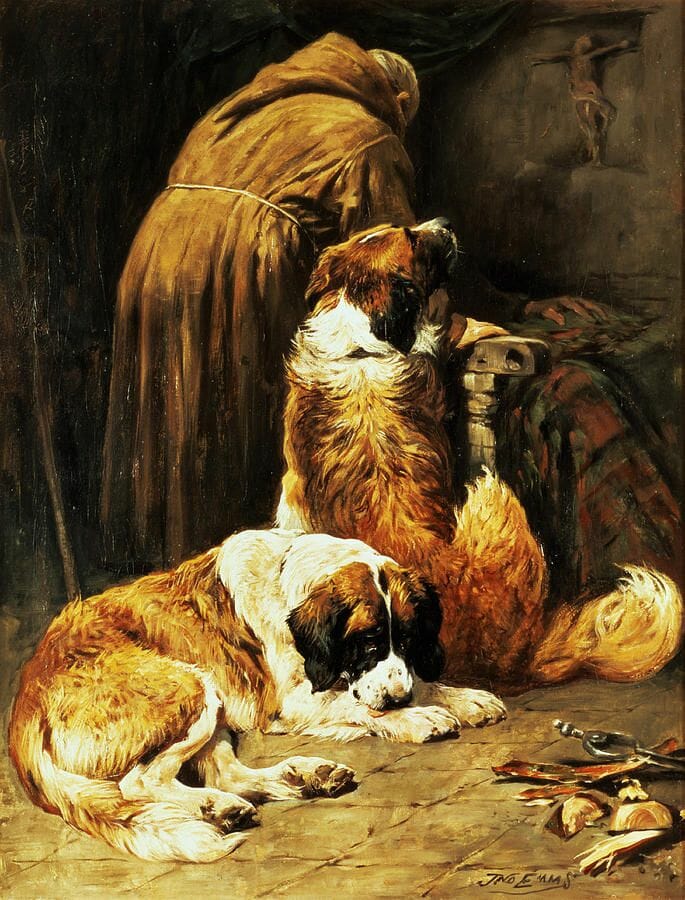 Saints Can be Animal lovers!

In effect, it would be a kind of sign of recognition: the animals with the barrel were certainly St. Bernard’s dogs, and therefore saviors. Today, safeguarding the creation and love for animals seems to be the prerogative of groups claiming their secularity. Yet, many saints loved animals. St. Francis, the most celebrated, is nothing but the tip of the iceberg: before and after him, from St. Romuald to St. John Bosco, from St. Vito to Padre Pio, the animals followed the path of the sanctity of the Christians, helping them in their own way and being helped by them. Few people know that there is even a dog, named Guinefort of Burgundy, venerated as a saint, concerning which the Church insisted on the prohibition of the cult.

And then there’s Barry, a mountain dog that saved around 40 people from being frozen in Napoleonic times and is now embalmed in Nussbaumer, Switzerland.

Bernard of Menthon became a Saint and was Canonized in1681 by Pope Innocent XI and had its Feast celebrated on May 28.