Naoto Matsumura: The Angel of Fukushima

Go Tell it On the Mountain, Uff’da has His Wings

“Uff’da,” a Norwegian word meaning “Oh My Gosh,” was the first word out of my mouth when I saw the little pony standing all alone on a wooded hillside off Rabbit’s Foot Road. Not another creature was in sight.

Seeing me, the dark grey pony with a thick mane and already white whiskers, jogged boldly down the hill, ready to engage, greet me or stand his ground. I was uncertain which, as I had a large husky-wolf mix at my side. The pony was barely taller than the dog. His body language was cautiously accepting of me but warning the dog to keep his distance, as if to say, “this ain’t my first rodeo!”

I’d heard about this seemingly abandoned pony from my neighbor/friend/hairdresser. Her clients regularly hiked on the country lanes. Always, the pony came down the hill to greet them and then sadly watched them go on their way. There were never other animals or people around—for years. Horses are herd animals and do not like being alone.

Eventually, curiosity or humanity stirred the hikers to question the situation. They discovered that an elderly couple had endured a death. The survivor went to live with her daughter out of the area and couldn’t take the pony. She’d supposedly entrusted the pony’s care to neighbors. Time either passed or stood still, depending on whether you’re human or equine, for years.

My best guess is that the pony was pushing 30 years old when I met him. He suffered some undiagnosed health issues with his teeth and hooves. At some point in his life, it appeared that a halter had been placed and left on too long. It had shrunk, became too tight, and cut into his face, head, and the bridge of his nose. Now, only white hairs grew in the old, well-healed scars. Many of his teeth were abscessed, not in proper alignment, limiting access to optimum nutrition. His coat was dull and shaggy, not shedding. The toes on his front hooves curled up like clown shoes, putting undue pressure on his tendons, all due to lack of farrier visits.

My friend told the hikers, “I know who will take the pony,” and the rest is history. He’d been named “Homer,” but I called him “Uff’da.”

His age and life’s particulars were hard to come by due to poor historians and hesitancy and scattered family members due to so much time gone by. Still, several family members met me the next day as I came with my horse trailer to fetch him. After working out the legalities in no uncertain terms, I assured all that they were welcome to visit him.

Despite his physical issues and having been alone and ignored for so long, Uff’da had maintained a healthy mental attitude, never feeling sorry for himself or holding anything against anyone. He was so happy when the door of my trailer opened at my ranch, where he was met by a dozen other horses, all trying to say hello to this newcomer at once—what a joyous occasion.

Over the next two decades, Uff’da’s delight of being with others never lessened. He was so fearful of separation that I never locked him up. He was free to wander the ranch. And he did. He went from stall to paddock to field to greet and hang out with all of the other horses, spread in three or four pods. I nicknamed him “The Ambassador.” He even came to visit me. Many mornings, I woke up to see him standing on my deck outside my glass sliding door. 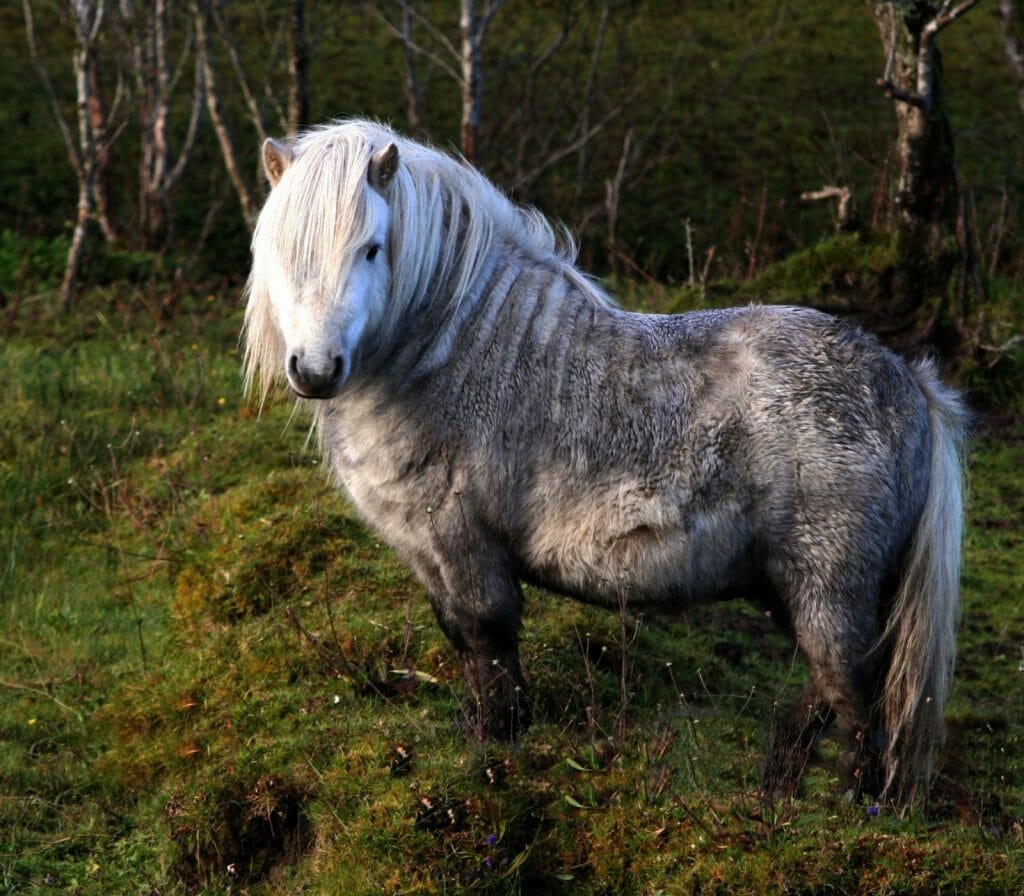 I had no idea how much and for how long he would charm not only my life but the lives of my family, friends, neighbors. He also charmed my riding group, vet, farrier, and even my co-workers at Sutter Amador Hospital’s ICU. They listened to Uffda stories year after year with annual Christmas letters and photos.

Regular hoof care improved his mobility. We pulled 13 teeth and provided oral care, regular grooming, and equine senior total nutrition pellets slightly moistened for easier eating. He blossomed. He shed, and his coat became glossy and dappled. After two choking episodes on coarse long-stemmed hay, I gave him only the pellets and loose, flaky chaff and no hard treats like carrots or apples.

Parties, a Fire and Family

In 2010, when Uff’da turned what I estimated to be 40 years old, I hosted a Paws and Pony party. As I call them, the Homer family responded with much enthusiasm, from grandma down to the grandchildren. I’d kept them informed every year of Uff’da’s status with letters and photos.

Around 2015, Uff’da and my two donkeys went to the Laughton Ranch while the Butte Fire raged. My other 15 horses were scattered and evacuated to Sonora, the Angels Camp Fairgrounds, Burson, and Ione. All eventually came home safely.

But in 2020, I called Homer’s family to invite them to say goodbye, as Uffda was now acting his age. Again, the family responded with great love, attention, grooming, and photo taking. Our dear Uff’da was so adored by all. He didn’t show his age that day!

The last year of his life, Uff’da wore itty-bitty easy boosts. I cut up my neoprene knee braces for extra cushioning for his feet. He still visited the field horses. In the evening, I carried his pellets and water bucket to wherever he was. He always maintained his body weight, stayed hydrated, and showed no signs or symptoms of aging like dementia. His eyesight, hearing, voice, and muscle tone were good until the end. His lungs were clear, and his heart was steady. Only his feet let him down. On the last two days of his life, he refused to walk — telling me, “I’ve had enough.”

I don’t know how many equines make it to age 50, but Uff’da is definitely in Silver Lining Ranch’s Hall of Fame. On his birthday, celebrated New Year’s Eve, I drank a “Baileys” and gave him an “ABC” (already been chewed) apple (yes by me!) as I did the very last minute before his death. I saw the twinkle in his eye as he kissed me, and oh so gently laid down and passed into the sweet sunshine as he got his wings. He had received what we all want: food, attention, companionship, and understanding.

About the Author: Mary MacBeth is a retired ICU nurse. She has raised horses and other animals for five decades on her ranch near Mokelumne Hill in northern California. Images Kind courtesy of Image (c) Mary MacBeth