Is a broken heart able to ever heal??

On the beautiful island of Honshu, there lived a jellyfish called Kanashimi. Despite all the beauty that surrounded her, Kanashimi was not happy with anything. After being deceived and deluded by those who considered her great love, the jellyfish could no longer trust anyone and carried an enormous sadness within her heart.

– Kanashimi, come take a walk with us – called the other jellyfish, mollusks, fish, and marine animals on the island. – The day is so beautiful!

– I’m not in the mood. I want to be alone, ”she mumbled, before walking away.

– What a beautiful full moon! Wouldn’t you like to admire her by our side? – insisted friends.

“I appreciate the offer, but I prefer to be alone,” the jellyfish repeated.

Nothing and no one was able to touch Kanashimi’s wounded spirit. Despite her size, beauty, and intelligence, she blamed the world around her for her unhappiness.

– My old friend, why do you keep this negative experience in your heart? Don’t you prefer to exchange it for pleasant moments? Why don’t you let the image of someone who hurt you go away? Let it go. Make room for new experiences – repeated the octopus Shiawase, a longtime friend of the jellyfish.

– They will never destroy my heart again.

– Who is destroying your feelings but yourself? – argued Shiawase but was ignored by the jellyfish.

The sea waters were carrying and bringing seashells and the seagulls continued to swirl in the sky. Then, one day, when Kanashimi went out to look for food, he found an abyssal fish. In her entire life, she had never seen a creature so ugly and horrifying. Besides, he belonged to the depths. What was she doing there?

She shouted rudely. – What are you doing here?

– Hello good day! – She greeted the fish sweetly. – What a wonderful day to see a new place. Are you alright?

– Enough talk. Go back to where you came from.

Frightened by the aggressiveness, the fish said:

– My name is Kukai. I’m an outsider. I would like to know a little more about this side of the island of Honshu. Would you have time to show me everything you like best?

– What do I like most? I DO NOT LIKE ANYTHING! Snapped the jellyfish. – Go away! I have to look for food.

– Ah, how beautiful! Let’s go together.

Whatever the situation, the abysmal Kukai fish never lost its sense of humor.

Throughout that day, Kukai accompanied Kanashimi only on the strength of her desire. The jellyfish remained angry and unpalatable.

After the day ended, Kanashimi felt lighter. She couldn’t explain why, but something emanating from that smiling and playful abyssal fish had changed her day.

Proudly, the jellyfish did not thank or say goodbye. However, she was unable to get Kukai out of her head.

The next morning, incredibly, the abyssal fish was in the same place. He seemed to be waiting for Kanashimi. And that same scene was repeated for a month until Kukai stopped appearing.

Missing him, Kanashimi moved silently around the island of Honshu. While looking for the abyssal fish, she was able to feel the sun’s rays, the waves coming and going, the joy of the sea animals, the soft touch of the water on her thin skin.

It was then that she came across Same, the shark with whom she was deeply in love and who broke her heart.

As Kanashimi looked at him closely, she realized with surprise that she no longer felt anything. Her mind could only think of the pleasant moments she had spent beside Kukai, the ugly fish under the sea. Then the jellyfish turned its back and left.

Kukai disappeared. He was never seen again in such shallow waters. However, Kanashimi came to appreciate the beautiful island of Honshu in all its splendor; the lively environment that surrounded it; the company of friends, and the sweet memory of Kukai. She realized that her heart was open again.

Kanashimi learned to smile again. Her mind was pounding in serene beats.

Feeling the touch of the waters was wonderful! It always has been and always will be. 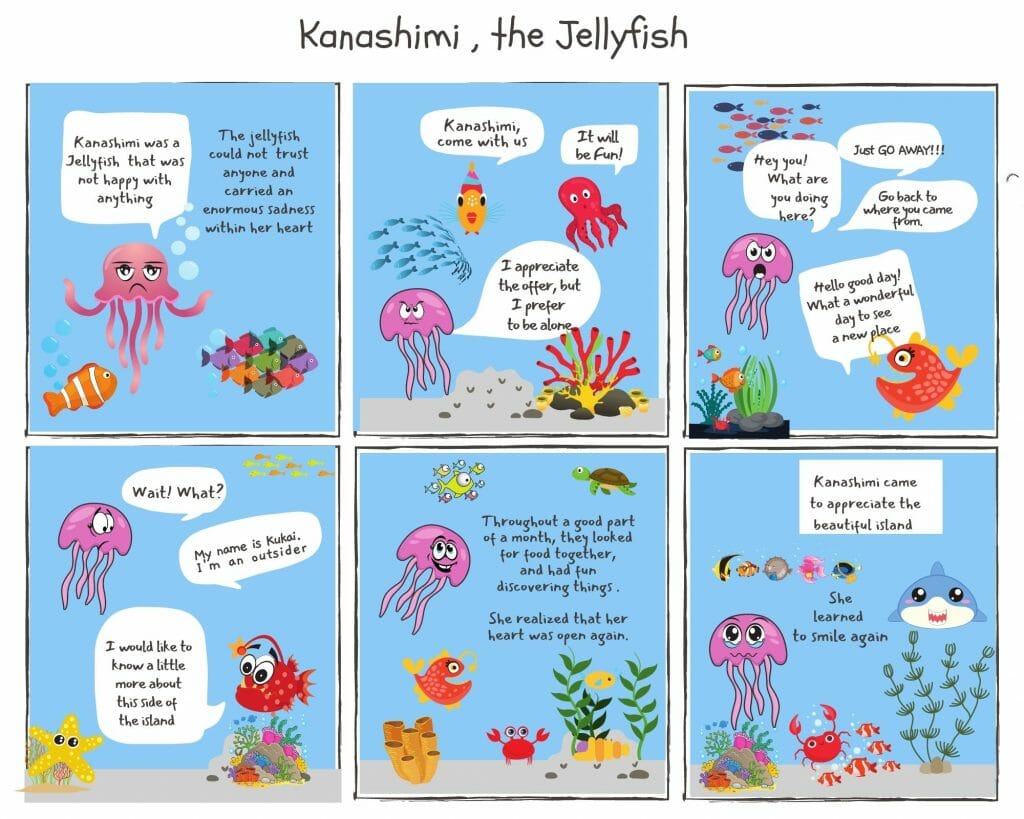