More Than Just a Community Garden

KITSUNE: The Legend Of The Nine Tails Foxes

Foxes are a trendy symbol of the Japanese Imaginary.

Fox archetype is an important reference in Japanese mythology because it is considered a magical fox of the Yōkai Kingdom (the realm of supernatural creatures). Kitsune are classified as creatures of the “Mononoke” class or shapeshifters (animal spirits that turn into humans, such as Bakeneko, Tengu, and Tanuki). Their image may stand for trickery for some and advanced intelligence to others. Some of the many legends are animals with mystical, sacred, or “cursed powers.” It is said that their Superpowers increase with their age and wisdom. So, the stories tell that every 100 years, they receive a new tail, and then, when they reach nine tails, they become “demigods.” Due to their power and influence, the legendary foxes receive offerings as if they were deities in the Land of the Rising Sun.

“A fox tale” (2011) is a short movie made by 4 students at the french school Supinfocom Arles.
usic by Guy-Roger Duvert

The Origins of Myth

The Kitsune are considered messenger spirits, associated with Inari, the Goddess of Fertility or “goddess of rice, agriculture, prosperity, and success.” They are usually represented as a female figure; however, some stories portray her as a male figure. Inari is a very popular deity with a multitude of sculptures scattered throughout Japanese territory, her sanctuary being one of the most famous in Japan.

Many of the Japanese myths about foxes can also be found in the folklore of China, Korea, or even India. These stories were recorded in the famous Konjaku Monogatari, an 11th-century collection of Chinese, Indian and Japanese narratives.

Legends about Kitsune almost always encompass wisdom, as the famous saying “Smart as a fox” proclaims, symbolizing intelligence and wit. However, Kitsune has to keep its promises and, above all, follow its word of honor. They become self-destructive if they break their word given as an honored vow.

When someone breaks a promise to them, they become their mortal enemies since Kitsune is known to be emotional and sometimes very vindictive. Described as creatures of extreme intelligence, Kitsune possesses magical abilities that increase with their age and wisdom.

It is a common belief that every 100 years, a Kitsune would receive a new tail. Their color would then changes to silver or gold becoming, and they automatically become more powerful. When they reach nine tails, they are referred to as Kyuubi in Kitsune and become demigods. They personify infinite wisdom along with the ability to hear anything. This capacity is expanded depending on the type of Kitsune, to humans’ thoughts anywhere in the world. These elderly Kitsune reach omniscience and almost omnipotence. Therefore, the more tail it has, the more powerful the “Kyuubi no Kitsune” will be. 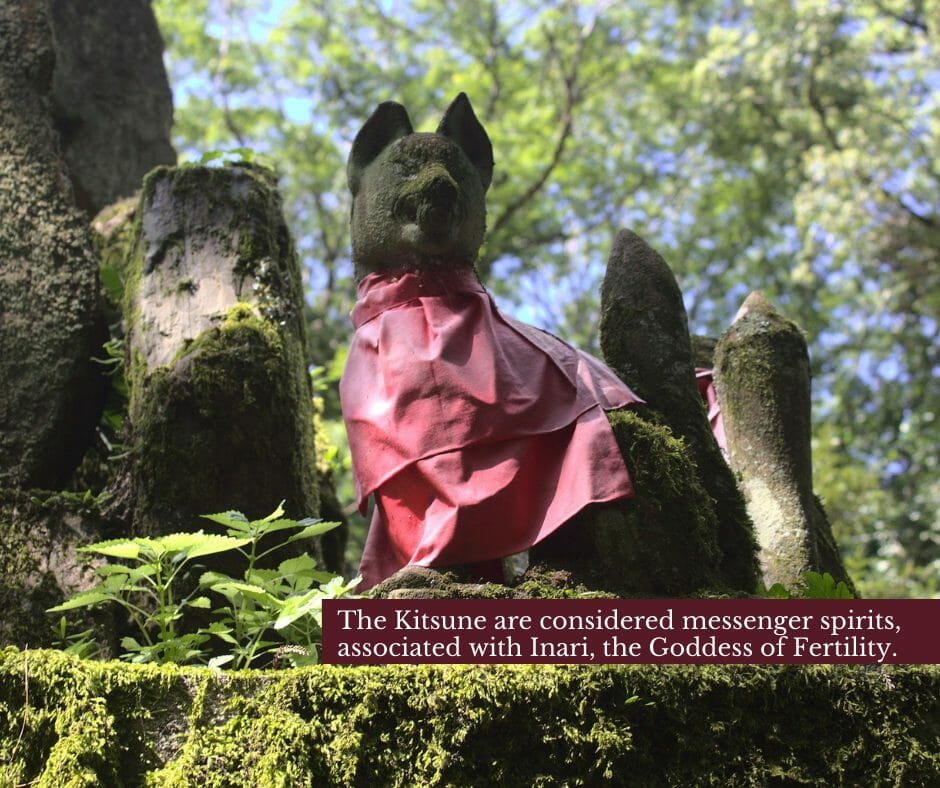 Other supernatural characteristics generally attributed to Kitsune include tails that generate fire or lightning (known as kitsune-bi, literally, fox’s tail). Amazingly enough, some people believe that some of these creatures have characteristics that resemble vampires or succubi and feed on the life or spirit of human beings, usually through sexual contact.

The different types of Kitsune also have different abilities. For example, Nogitsune, known as “kitsune Obscura,” feeds on humans’ life or spirit. They are also able to manipulate time and space and interfere with people’s dreams. But there is also a Kitsune thunder who manages to absorb and discharge energy, always bringing an aura of fire with it invisible to our untrained human eyes.

One of their primary skills is the ability to assume human form. These Shapeshifters, when transformed, typically appear in the form of a woman, young and beautiful. Still, some Kitsune was reported taking on other faces such as an old woman, child, or even more fantastic characteristics, such as a tree of incredible height or a second moon in the sky. They are usually named after female names, so all Kitsune are believed to be female. Some legends say that they use these powers to deceive people. Others say that they are faithful friends and companions or even become beautiful and loving wives.

These unions can produce children who are not necessarily foxes, but they can inherit their supernatural powers. When they are among mortals, they do not use their real names to be used to arrest or banish them. If someone behaves according to their ethics, they will become polite, kind, and helpful. Folklore says that, like common foxes, they fear dogs, running away every time they see one, so Kitsune tend to live in families and work in groups. The contradictions are evident in a large number of kitsune legends, just as they were feared and hunted on the one hand and venerated and adored by others. While some tales talk about them employing their skills to deceive others, other stories often portray them as faithful guardians, friends, lovers, and wives.